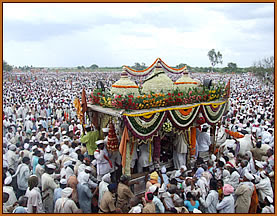 Ashad Wari is a 220 km walk by lakhs of devotees, which starts from Alandi and Dehu two places known for saint Dyneshwar and saint Tukaram and culminates at Pandharpur, the place of Lord Vittal. It is a massive 3 week devotional carnival where in the beginning there are around 2 lack devotees from 8 years to 80 years of age,  getting added while on way and number increases to 15 lacks till final destination (Pandharpur). It is not just a pilgrim walk but a tradition of Maharashtra, which covers all religions, indicates integrity of country in real sense.


AIR Pune has planned a grand event of exclusive coverage of pilgrim, called Ashadh Wari. Station has received sponsorship for state hook up coverage of the event. In addition to curtain raiser, on every day station will produce a radio report of half an hour duration. Also a live commentary of the procession for 2 hrs between 4.30 PM to 6.30 PM on arrival of Wari at Pune will be originated by Akashvani Pune..

Two Akashvani vans will be the part of procession, well decorated and fully equipped. It is as good as AIR studio on wheels. AIR teams in these vans are not only for producing radio reports but they are eager to grab ample rare stories associated with the tradition and personnel experiences of the year old participants. There is scope of its documentation along with suitable photographs in near future. Through this event AIR Pune is taking full advantage of entering as mass media and exhibiting itself as public service broadcaster.
http://airddfamily.blogspot.in/search?q=Wari
Posted by akashvanisamvaad at 16:03