As cold wave continues to grip parts of North India, Delhi witnessed its coldest day of the season on Wednesday. Delhiites woke up to a chilly morning with a minimum temperature of 4 degree Celsius, which was three notches below the season’s average. 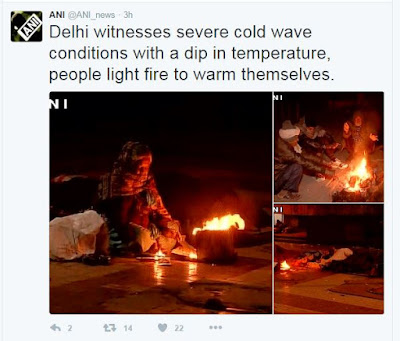 According to the India Meteorological Department (IMD), the minimum temperature was expected to be four degrees Celsius on Thursday, while the maximum temperature on Wednesday was likely to hover around 17 degrees.

In the coming week, Delhi along with other parts of northern India, including Haryana, Punjab, and north Rajasthan are likely to come under a cold wave condition.
The minimum temperature in Delhi is expected to dip to four degrees Celsius from January 10-13, making it the season’s coldest week, according to the India Meteorological Department (IMD) officials.

"The sky will remain clear with shallow to moderate fog in the morning," an IMD official told IANS.
The capital has been witnessing warmer winters for the past 5 years, but now this season the temperatures for both day and night are tend to fall by 2-4 degree Celsius.

Railways are the most affected by this cold wave. So far 26 trains have been delayed, 8 rescheduled and 7 cancelled due to fog and other operational reasons as reported by ANI. 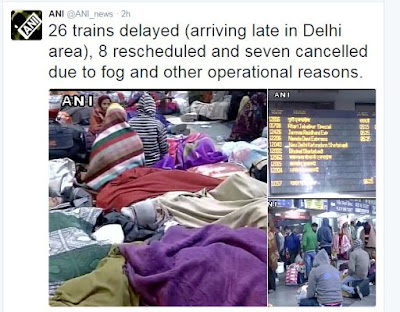 The humidity level in the national capital on Wednesday recorded at 8.30 am was 85 per cent. As per India Meteorological Department (IMD), the sky will remain clear with shallow to moderate fog in the morning while skies will remain clear and maximum temperature is expected to settle at 17 degrees Celsius. Even in this cold wave, the afternoons are basking and helping people to stay warm in the sun.
As per IMD forecast, the cold wave conditions are likely to mellow down from January 13, onwards.