The Road to Dusty Death 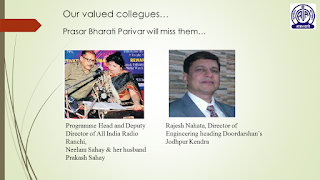 “To everything,” goes the song


On a dusty road in Jharkhand, we lost a valued colleague. The Programme Head and Deputy Director of All India Radio Ranchi, Neelam Sahay and her husband Prakash Sahay, lost their lives in a road accident at Bakeria under Satbarba police station area of Palamu district. On Sunday morning around nine, a truck hit the car in which they were travelling from Ranchi to Daltonganj.
In faraway Rajasthan, Rajesh Nahata met the same fate on the Jodhpur-Nagaur Highway on April 22. His car collided with a roadways bus coming from the opposite direction. A Director of Engineering heading Doordarshan’s Jodhpur Kendra, he was on his way to Bikaner to assume additional charge of the Bikaner Doordarshan Kendra.
Two lives cut short while on the saddle. Two lives too many.  It is a time to weep…at this irreparable loss. Of two irreplaceable professionals in the prime of life.


“To everything,” goes the song


“There is a season…


A time to build up, a time to break down.


It is a time for the Prasar Bharati family to mourn and to stand behind the devastated families in their hour of grief.
Rajesh Nahata will be remembered for his infectious positivity, for being an upright and dynamic officer, and an excellent technocrat. Forever ready to extend a helping hand to his juniors and friends.
Neelam Sahay carried the responsibility of serving the organization in difficult areas. She was also an accomplished music artiste whose stage performances were the talk of town. Her mellifluous voice will be sorely missed.
And while we write epigraphs for the departed souls, it is also time to ask a few searching questions. A season to stop and ponder, to create hard-hitting mass media campaigns. To take a leaf out of the book of those countries who have bettered their road-safety records. By better planning and policing. Through stronger laws, more effective enforcement and better infrastructure.
“To everything,” goes the song


“There is a season…


In this season of loss, perhaps it will not be out of place to take a look at road safety statistics world over. Since reaching a peak in road deaths in the 1970s, rich countries have become much better at reducing the number of traffic accidents. (Poor countries, by contrast, have seen an increasing death toll, as car sales have accelerated.)
In 1997 the Swedish Parliament wrote into law a "Vision Zero" plan, promising to eliminate road fatalities and injuries altogether. Swedes believe—and are now proving—that they can have mobility and safety at the same time.
In the last three years, 17 countries have aligned at least one of their laws with best practice on seat-belts, drunk–driving, speed, motorcycle helmet or child restraints.
Roads in Sweden are built with safety prioritised over speed or convenience. Building 1,500 kilometres (900 miles) of "2+1" roads—where each lane of traffic takes turns to use a middle lane for overtaking—is reckoned to have saved around 145 lives over the first decade of Vision Zero.
12,600 safer crossings, including pedestrian bridges and zebra-stripes flanked by flashing lights and protected with speed-bumps, are estimated to have halved the number of pedestrian deaths over the past five years. Strict policing has also helped: now less than 0.25% of drivers tested are over the alcohol limit. Road deaths of children under seven have plummeted—in 2012 only one was killed, compared with 58 in 1970.
Every life lost in a road crash is an avoidable tragedy. Can we take a leaf out of Sweden’s book?
Shouldn’t we dedicate ourselves to our very own Vision Zero?
It is a season to deliberate, a (high) time to act.
Contributed by   Basudha Banerji, PEX, AIR