When Neil Diamond crooned “reaching out, touching me, touching you” in that iconic song Sweet Caroline, he could as well be singing about radio. Radio, which reaches out across seemingly insurmountable geographical divides, touches countless lives and yet remains in the background. Like a good friend who never pries but steps in on a bad day with alacrity as the world has witnessed again and again when natural disasters strike. When all new fangled media fail in the face of Nature’s fury, radio is that saviour that connects people, connects lives and connects hope.

It was to honour this radio that the United Nations proclaimed 13 February as World Radio Day in 2011, with the vision of celebrating how it helps shape our lives.
To quote from the UNESCO website, “by listening to its audiences and responding to their needs, radio provides the diversity of views and voices needed to address the challenges we all face.”
This is most relevant for the developing societies which are clearly disadvantaged by their lack of access to the latest information technologies. The switch to the global information super highway would give an unfair advantage to rich nations over the poor, feels the Third World which continues to root for radio. Radio broadcasting crosses the barriers of isolation and illiteracy and it is the cheapest electronic medium to broadcast and receive.
Though World Radio Day is only a 6-year-old, radio itself is a Long Playing story with India getting into the groove in 1927 with the setting up of the first station of the Indian Broadcasting Company in Bombay. It is in fact, a ninety-year-old story!
Radio perhaps faces the most impossible challenge in India with its population of 1.25 billion and humongous diversity in ethno-socio-linguistic characteristic, literacy levels, economic disparities, gender inequality, disparity in distribution of resources, rural-urban gulf, digital divide and so on.

The public service radio broadcaster All India Radio (AIR) has risen admirably to this challenge by its steadfast focus on the development of a learning society/a knowledge community, inculcating scientific temper, empowerment of women, amelioration of the underprivileged, spreading the message of planned parenthood, diffusion of agricultural innovation, rural regeneration, skill development to capture benefits of the demographic dividend, preserving and strengthening India’s cultural, linguistic and ethnic diversity and fortifying India’s democratic and secular traditions and values.
Fulsome praise for radio’s development initiatives came from no less than eminent agricultural scientist and Father of the Green Revolution, M S Swaminathan:
“Even those who were excluded from the technological transformation could be included because they heard about new technologies through radio. In fact, I remember in 1967 – 68, many farmers in UP and Bihar would call the new varieties of rice, wheat and other crops as radio varieties because they had heard about them on radio. This is why I would like to pay a tribute to All India Radio which is in some respects the unsung hero of the Green Revolution.”
What does radio mean to the world’s largest middle class society, a fast changing society at that?  New radio seems to have created yet another division in and already fragmented milieu – the smart alec go getter minority versus the ordinary folk (spelt losers) majority.
In consonance with the concept of smart cities, what is urgently required are global middle class citizens to inhabit them, to avoid a sheer mismatch; creating an atmosphere of cerebral modernity paired with the best of national values and culture, ensuring inclusivity for all (not just a select smarter few). And that is what underscores the role and significance of the national public broadcaster, All India Radio. Armed with its motto (Bahujana hitaye bahujana sukhaye), pedigree and network, AIR possibly is the only national media institution left which has the wherewithal to address myriad sections of society in an unbiased and sensitive manner. 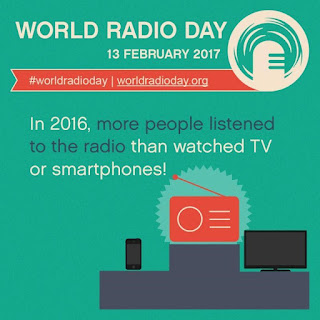 Before the misdirected disillusioned youth of India reach a stage where they are not able to speak a single legible sentence, before they begin to rebel violently on account of sheer cerebral inactivity, it is only All India Radio that is endowed with the capability to provide linguistic engagement and enrichment to today’s partly intellect deprived youth, a population that numbers dangerously high. A random audio survey done in any city/rural neighbourhood of the country will reveal the abyss of linguistic bankruptcy that our youth are gradually being dragged into. Public speaking is not part of the curriculum in our private schools, let alone the public ones.  All India Radio, with its gigantic AM network has the power to pull them back to the mainstream of self development and hence nation building collectively.
Critics may argue that the wheels of this juggernaut inch a tad sluggishly; what they do not realise (or do not want to realise) is that nation building is not just radio ads and jock talk trying to sell one, two or three BHK houses - it is ensuring cultivation and preservation of the human element in HOMES, that too all homes.
Public Service Radio disseminates information in the most democratic manner. It speaks the language of the masses and it reaches the last man. Serving a variety of fare in variable formats – plays, news, talk shows, music, running commentaries, special programmes for special audiences, leaving none out. 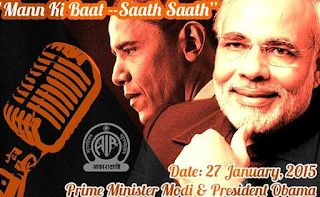 Radio rules the imagination. Radio is theatre for the blind. Radio is an intimate story telling medium. Is it any wonder then that the Prime Minister of the world’s largest democracy should choose AIR over others for his intimate heart to heart talk with the citizens?  As someone quipped, when it comes to radio, people are all ears!  We can’t do better than to quote the Prime Minister himself when he said: “If we touch those questions (questions that touch the heart) we will be able to reach out to the common man.” No wonder, Mann Ki Baat became an instant success as it decidedly is packaged with precision and put through on a dissemination network with vast domestic and global reach.
AIR is arguably one of the largest radio networks of the world, with 420 stations throughout the country, serving different segments of the population, including the underdog.  You can’t have a more potent instrument than AIR for exchange of ideas between the country’s Prime Minister and his people.  Indeed, Mann ki Baat epitomizes all that is best in public service broadcasting.
Radio is a Long Playing song that changes its beat with the times. It is adapting to 21st Century changes and offering new ways to interact and participate. Becoming more and more interactive. This explains why the theme for World Radio Day 2017 is “Radio is You!” – a call for greater participation of audiences and communities in the policy and planning of radio broadcasting. To quote UNESCO again, “Where social media and audience fragmentation can put us in media bubbles of like-minded people, radio is uniquely positioned to bring communities together and foster positive dialogue for change.”
A contribution by DG All India Radio, Shri F. Sheheryar