“Splendid!” I said, “And what beautiful initials!” The Viceroy concluded that he had invented it. And there was no more trouble.
Thus All India Radio was born.” 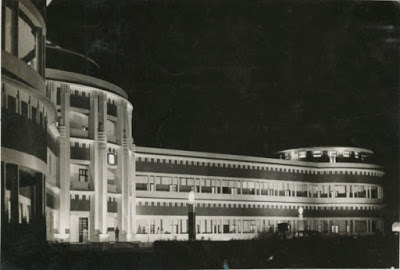 Organized broadcasting in India began in Bombay when the first station of the Indian Broadcasting Company (IBC) was inaugurated by the British Viceroy of India, Lord Irwin on July 23rd 1927. Calcutta soon got its own station on August 26, 1927. These stations operated on medium wave of 1.5 kw of power. Radio Broadcasts by the end of the year reached about 3500 license holders.
However in a tragic turn of events, the IBC went bankrupt owing to under-capitalisation and high price of receiving sets. The liquidation of the company led to many representations to the government for the continuance of the service.  The government decided to take over the stations at Bombay and Calcutta at the depreciated value of its assets and staff at the existing terms of the company.  Thus from April 1, 1930 broadcasting in India came under the direct control of the government.  It was placed in the Department of Industries and Labour under the designation ‘Indian Broadcasting Service’. Faced with financial stringency, the government reduced IBC’s monthly expenditure to Rs. 2400 and then further to Rs. 2200.  Faced with ‘recession’, the government eventually decided to close down the broadcasting service.
The decision naturally caused widespread resentment and certain amount of agitation especially in Bengal.  The Government of India therefore decided to continue its broadcasting service by increasing duty on the Receiving Sets from the existing 25% to 50 %.
By the end of 1932 when the BBC started its Empire Service, the number of people opting for receivers steadily increased from 8000 to 11000 approximately. The number jumped to 16000 by the end of 1934, when the government embarked on a policy of development of broadcasting by sanctioning Rs. 2.50 lakhs for the establishment of a radio station in Delhi.
In September 1935, broadcasting began in the princely state of Mysore with the name AKASHVANI (the voice from the sky).  Dr. Gopalaswamy, Professor of Psychology at the Mysore University had set up a 30 watt transmitter at his house.  A 250 watt transmitter was later imported.  It continued with support from the public and the Mysore Municipality till it was taken over by the Mysore State in 1941.
The Delhi station of the Indian State Broadcasting Service went on the air on January 1, 1936, from the temporary studios in 18 Alipur Road.  The 20 kw mw transmitter was located at Mall Road.  By now Controller Lionel Fielden, was able to persuade the Viceroy Lord Linlithgow to adopt the name ALL INDIA RADIO despite opposition from the Secretariat.  The new name was adopted from June 8, 1936.

(*-Extract from an interview with Sir Lionel Fielden, the first Controller General of AIR on the name All India Radio, his creation.)
Posted by akashvanisamvaad at 10:43