When a 15 or 16 year old girl walked in to record a song - "Mohe Aane Lagi Angrayi" for the Hindi film 'Aiye' which was released in 1949 ,little did anyone know that the girl would go on to become the doyenne of Indian music industry. The girl's name was Mubarak Begum.Today is the death anniversary of Mubarak Begum who passed away on July 18, 2016. 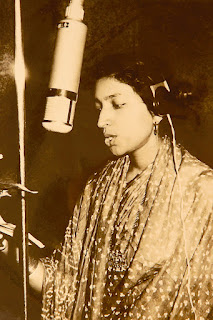 Born in Churu, Rajasthan, she grew up in Ahmedabad. Mubarak started off her career with music recitals for All India Radio(AIR), but, went on to sing over 178 songs in Hindi films. She collaborated with composers like S.D. Burman and Salil Choudhary. She was considered part of a generation that laid impetus on tone, texture and style of singing. Begum was heavily inspired by the singing of Suraiya. 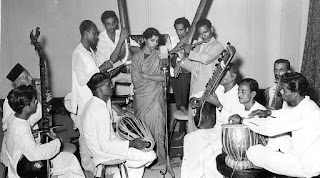 Beloved across the nation,Begum left playback singing many decades ago, but, with evolving tastes and transitions in the movie fraternity, she faded into retirement much early in life necessitated by certain compulsions.

She left for heavenly abode 2 years back, but, the melodious songs she has bestowed upon the country with will remain for people to hear and to enjoy. A face of strong-will, Mubarak Begum's music and legacy will remain itched in the minds of her fans for a long time.