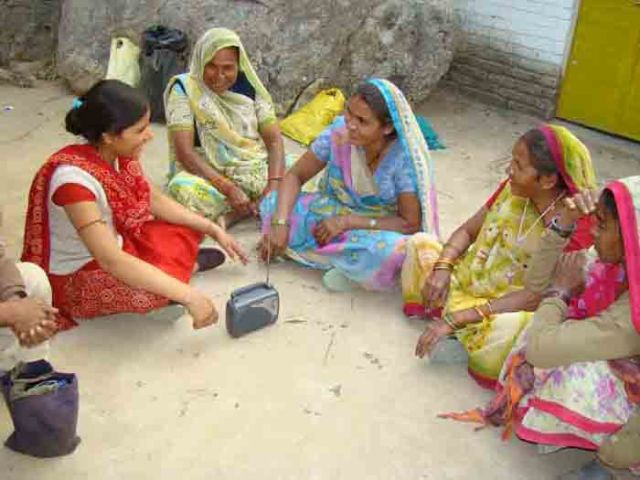 Although a recent phenomenon, community radio has touched many milestones in bringing development to the rural areas and community mobilization.


Community radio is by definition a broadcasting system established by the efforts of a specific or identified community, owned and operated by the community for the community's welfare.

'Community radio has three key aspects: non-profit making, community ownership and management, and community participation. As community groups (World Bank Institute) have defined it, "Community radio is distinguished by its limited local reach, low-power transmission, and programming content that reflects the educational, developmental and cultural needs of the specific community it serves."

In India, community radio as a legally recognizable entity is a fairly recent phenomenon although using the national radio for social mobilization began as early as Independence. The emphasis on using radio broadcast technologies for rural development continued with independence and beyond. Rural programming in regional dialects formed an important part of the overall programme content.

The principal objective of All India Radio, India's nationalised radio broadcasting organisation, was the "conversion of All India Radio into a means of bringing practical assistance and pleasure to the millions in the villages" (Mathur & Neurath, 1959).

The coming of ICT and the growing commercialization of the radio airwaves led to a demand for community radio. In 1995 the Hon'ble Supreme Court ruled that "airwaves constitute public property and must be used for advancing public good".

In India community radio started at the turn of the century when Government opened up the radio sector.

Community radio is based on a core set of values which makes it different from mainstream media. At the core is participation of communities. I would like to state these may be communities of interest (cultural, social, linguistic... and so on) or bound by geographical boundaries. I would go to the extent of saying even a community of listeners. In its purest form the Community radio is based on voluntarism and an urge to preserve and propagate ideas and identity that may not find ready takers in the commercial or mainstream media and yet are necessary for "advancing public good" and for making democracy inclusive.

Secondly, the CR policy guidelines state that "emphasis should be on developmental, agricultural, health, educational, social welfare community development and cultural programmes." These are important and needs to be created by the participation of the community.

Today, there are around 163 operational community radio stations. Out of a total of 1304 applications till February 2014, letters of intent have been issued to 461. However it may be seen that development of community radio among educational institutions and NGOs is a bit skewed and is not evenly spread across the country. There is a need to deliberate on this and to understand as to why the awareness of community radio and its potential is poor in some parts of the country and not so vibrant in rural areas.
In advanced democracies radio spectrum is divided among three main categories of broadcasters: public, private and community. Many countries including the United Kingdom and Colombia and Uruguay reserve part of the spectrum for community broadcasting in order to ensure equitable access. In India while there is no formal reservation on the number of licences that can be granted in any location, only a maximum of three frequencies have been allocated in any given location. This may be due to the policy of channel spacing.
Source: Employment News
Posted by akashvanisamvaad at 07:47