He is now the SECOND FASTEST bowler in the World! 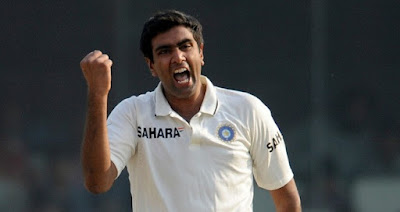 Ravichandran Ashwin entered the record books amid the first Test against New Zealand by turning into the fastest Asian bowler to take 200 Test wickets. He achieved the feat by taking the wicket of Kane Williamson. He is the second fastest, the first being Australia’s Clarrie Grimmett who achieved this feat in the year 1936 and still holds the record as he achieved this in just 36 tests.
Ashwin accomplished the leap forward in his 37th match and beats Australia's Dennis Lillee and Pakistan's Waqar Younis who included second spot on the untouched once-over of speediest to 200 Test scalps as both got theirs in 38 Tests.
The 30-year-old from Chennai, who made his debut against the West Indies in 2011, is currently ranked third in the International Cricket Council (ICC) ratings for Test bowlers.
Ashwin, who has become India's frontline bowler, also becomes the fastest off-spinner in history to reach 200 wickets. 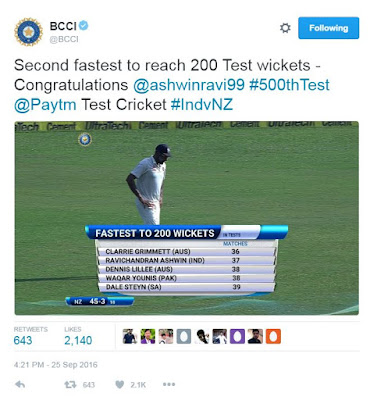 
Akashvani congratulates Ashwin and conveys good wishes for his future endeavours.
Posted by akashvanisamvaad at 13:09