We know what the country is chanting about and why is it filled with pride and awe today. It would be rightly said that it is India’s best performance in Paralympics so far. The Indian contingent at the Rio Paralympics 2016, is marking its presence on a global level now.
With the players creating history and breaking their own world records India now holds 4 medals (2 gold, 1 bronze, and 1 silver) on the medal tally at Rio Paralympics 2016.


Javelin thrower Devendra Jhajharia created history by becoming the only Indian to win two gold medals in Paralympics so far. The 2004 Athens Gold medallist on Wednesday, again bagged a Gold medal with a new world record, by breaking his own record. Participating in the F46 category of Javelin, Jhajharia created a new World Record by throwing 63.97 in his third attempt, thereby breaking his own previous record of 62.15 meters.Hailing from a native village in Rajasthan, the 36-year-old currently ranks third in the world. With this medal India is currently at 31st position in the rankings with a tally of four medals.
India now have two gold, one silver and one bronze in the ongoing edition of the Games. 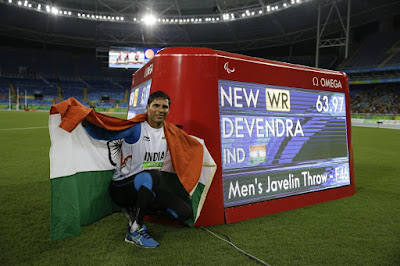 As mentioned above this is India’s second gold at the Paralympics, the first was bagged by Thangavelu Mariyappan, in Men’s High jump on 10th September. While Mariyappan secured gold, Indian player Varun Bhati secured a bronze in the same event. The 20-year-old Thangavelu hailing from Tamil Naduadu made a leap of 1.89m, while Bhati jumped his personal best of 1.86m to finish third. USA's Sam Grewe bagged the silver medal. 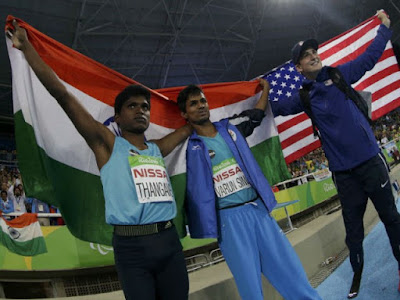 Later, Deepa Malik won a silver in the women’s shot put event to add to the tally.
Shot-putter Deepa Malik has created sporting history after becoming the first Indian woman to win a Paralympics medal. 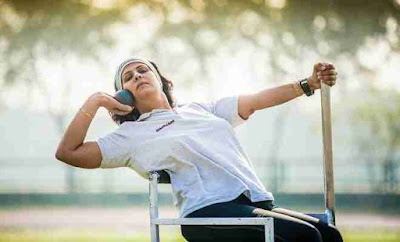 She won a silver with an impressive throw of 4.61m (15.12ft) in the F-53 final event on 12TH September in Rio.
Many in India have taken to Twitter to praise her historic achievement.
With Jhajharia’s win India's Paralympians have already outperformed India's Olympic contingent of more than 100 athletes.
All India Radio conveys heartiest congratulations and best wishes to the Paralympians in the ongoing Games.
#JeetoRio