Today is the 157th birth anniversary of Prafulla Chandra Ray who is widely regarded as the father of chemical science in India. Born in Jessore district of Bengal Presidency now in Bangladesh), Ray was a chemist, an educationist, a historian, an industrialist and a philanthropist. 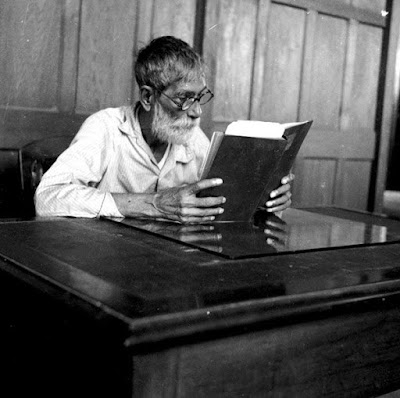 Born in a wealthy family, Ray's father was a Zamindar and had six children. Ray enrolled at the Hare School in Calcutta in the year 1870, but, had to drop-out in 1874 owing to a severe attack of dysentery. It was during his recovery at his ancestral home that he developed love for literature. While recovering, he studied Bengali, Greek, Latin, French, Sanskrit and English. Continuing his education, he enrolled at the Metropolitan Institution as a First Arts(FA) student and later as a BA student at the University of Calcutta. It was while he was pursuing his BA, he applied for a scholarship to study B.Sc at the University of Edinburgh and won the scholarship and sailed for UK in 1882.

Ray completed his B.Sc and D.Sc from University of Edinburgh and was awarded the Hope Prize to continue his research after his
doctorate. Later on his arrival in India, he started the Bengal Chemical Pharmaceutical Company with a seed capital of Rs 700.  At the same time, he continued his research at the Presidency College and mentored acclaimed scientists like Satyendranath Bose, Meghnad Saha and Jnan Chandra Ghosh.

After meeting Gandhi in 1901, Ray developed great reverence for Gandhi. Ray contributed generously to the rehabilitation of the Northern Bengal flood victims by organising Bengal Relief Committee which collected nearly 2.5 million rupees for the welfare of affected citizens.

He was knighted in 1912 and appointed a fellow to Indian Association for the Cultivation of Science in 1943. With knowledge of many languages including Sanskrit, Ray wrote a two volume work titled A History of Hindu Chemistry from the Earliest Times to the Middle of Sixteenth Century which was published in 1902.

In his life, Ray set many milestones and inspired his fellow beings to achieve excellence in life. A man with a wide variety of interests, Ray set a benchmark for the Indians and contributed wholly to the good of mankind.