Barun Haldar : A Baritone that Set the Tone to our Days 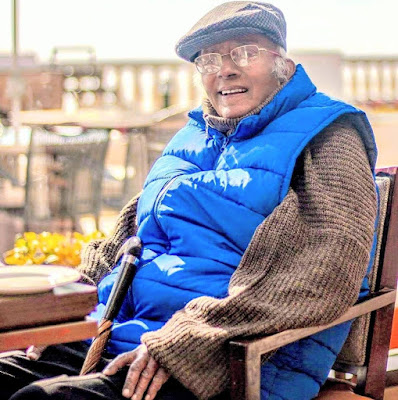 A voice that stole the hearts of innumerable people throughout his life has been silenced. By death, the inevitable. Barun Haldar, the man with the golden voice of AIR, that charmed the airwaves from the 1960s to the 21st century, is no more. He passed away last evening at Kolkata, the place which brought him his fame.

His family was one of those who came away from Burma to India and resettled here. Schooling was at North Point, Darjeeling. His English was impeccable.

At the Kolkata station of All India Radio he was BK. The one who signed off the most popular Western Music programme on Sunday afternoons – Musical Bandbox. Women (and perhaps men too) swooned over his voice. All eager to meet him. His fan mail would make people blush today. But he was shy. And self-evasive. Behind the mic he was on top of the world! Away from it, he would seek a corner to hide himself in.

‘Barun Da’ to me (he was my guru when I joined Kolkata station in December 1970) had a tremendous sense of humour. He was kind and understanding, but firm in his criticism. He gave you freedom but also taught you the nuances of streamlining a programme. He loved his Western Music and that love came through in his presentation. RJs of today would have a lot to learn from him.

He moved on from Kolkata station to New Delhi. From the Western Music arena to the wider arena of News. The timbre of his voice and the delivery made listening to the news just that much more pleasurable. I, too, moved from Kolkata to New Delhi and from Western Music to News. Here too, he became my guru. His standards were high and he didn’t hesitate to pull one up for any dips in delivery. Seldom has one seen Barun Da grim. He always had a ready smile. He was a great guru and a good friend.

Tall and dusky, with a gentle handsome face, he was attractive in a quiet way. As a professional, he was a perfect broadcaster. His voice had the depth, the roundness along with the boom. His personality was non-controversial. As Chief News Reader - New Delhi, he was apolitical, respected and loved. Barun Da's commentaries during the War of '71 were listened to most eagerly across India and especially in Bengal. If only there were more like him in the corridors of the Broadcasting House.

BK used to wear a beret as part of his persona in Kolkata. He took it off in New Delhi. Hats off to one of the greatest voices in All India Radio. Though we’ll miss you Barun Haldar, you will remain alive to us as we replay your broadcasts. Rest in Peace.