Goodbye Message from the Desk of Director General

My companions in the journey of broadcasting,

I have loved broadcasting, and you my colleagues, with heart and soul. And though I will be bowing out of this office the very day the year itself draws to a close, I believe I will remain connected.

As I reflect on the over 5 years of vicissitudes of my active service as Director General of one of the world’s largest terrestrial broadcast networks known across the world as All India Radio, I recall my colleagues working in different parts of the country for around 472 channels apart from the bolstering internet radio and a couple of apps like All India Radio Live and AIR 24x7.

I carry the regret of not being able to do all that I wished to, for reasons beyond my control. When I say that I have a sense of compunction, it does not obliterate my sense of satisfaction which comes from a vibrant All India Radio in spite of fast dwindling staff structure, but the mushrooming of unnecessary power centres resulting in dilution, if not erosion, of authority.

I joined broadcasting at the tender age of 21-plus and climbed the ranks from the grassroots. When I was baptised into broadcasting I learnt and I practised the universally acclaimed adage that a broadcast organization is nothing but professional excellence in content and technology which puts professionals on the forefront and all others, irrespective of the size of emoluments, behind them as a bolster,   rather assistants, to ensure that things happen as per the needs of the audiences and the sacred mandate of the broadcaster. I know the handful of professionals that exist in a fast growing network of All India Radio are the deities of the world of sound broadcasting deserving to be propitiated by those who come to help facilitate professional discharge of duties. But on seeing this handful helter-skelter at various places other than the core broadcast activity makes me feel saddened. I have a firm belief that whatever All India Radio, or for that matter Doordarshan, has earned by way of reputation in and around the country is by the sweat and toil of professionals.

I have done certain things that couldn’t be done before and without caring for consequences, tried to wipe the tears from the cheeks of richly deserving colleagues suffering the ignominy of insignificance. This has troubled me and will continue to torment my conscience till I see the landscape of my dreams existing in my wonderful country which is an ocean of talent, getting diverted to what they find greener pastures as against stagnation and deprivation in the home they opened their eyes in. By saying all that I said I want to draw the attention of all of you to what ails our broadcasting today.

If outlined in detail, this is truly the subject of a book. Friends, I am not sure whether I have been able to distil the water of the oceans into a small vessel but I am confident that you will glean an idea of what I feel.

I was akin to a germinated seed in 1981 and I gradually shot up in the warm rich soil of broadcasting. At fruit-bearing stage, however, I saw the termites eating into the very innards of the eco-system. I braved the corrosion and went on filling up the hollows with my determination to grow taller and provide shade to the toiling professionals waiting to be acknowledged for their talent and capacity to serve the world’s largest middle class society, apart from a significant elite and educated class.

I am a born optimist and a pragmatist by conviction. I know there is a cloud cover on the shining sun which will be removed at an appropriate time. The mist will dissipate and the rainbow will burst through.

I am demitting office as the Director General of All India Radio, Member of Prasar Bharati Board and the President of Asia-Pacific Institute for Broadcasting Development (AIBD). Dropping these three hats certainly will not mean that I cease to be a broadcast professional who still has a long way to go.

My country needs me and I have mustered a lot of strength to do my bit till I actually bid adieu to the world. I pray for all of you and also pray for All India Radio to regain its much needed broadcast technology for extra-India dissemination, capacity to continue to reach the last man, serve the languages and dialects that Indians have drank in while being nursed by their mothers, strengthen and showcase cultures, sub-cultures and the beautiful heritage endemic to different geographical entities of India and greatest of all, safeguard the credibility of the organization which I have ensured not only remains intact but also soars its graph with each passing day.

A dear friend of mine shared an English poem with me which I wish to share with you. Here it goes:

My Soul Has a Hat

I counted my years and realized that I have less time to live by, than I have lived so far.

I feel like a child who won a pack of candies: at first, he ate them with pleasure but when he realized that there was little left, he began to taste them intensely.

I no longer have the patience to stand absurd people who, despite their chronological age, have not grown up.

My time is too short: I want the essence; my spirit is in a hurry. I do not have much candy in the package anymore.

I want to live next to humans, very realistic people who know how to laugh at their mistakes and who are not inflated by their own triumphs and who take responsibility for their actions. In this way, human dignity is defended and we live in truth and honesty.

It is the essentials that make life useful.

I want to surround myself with people who know how to touch the hearts of those whom hard strokes of life have learned to grow with sweet touches of the soul.

I do not intend to waste any of the remaining desserts. I am sure they will be exquisite, much more than those eaten so far.

My goal is to reach the end satisfied and at peace with my loved ones and my conscience.

We have two lives and the second begins when you realize you only have one.

If I use metaphors to address you I would say that I did not have a bed of roses to lie on but the greatest satisfaction emanated from none other than the illustrious son of contemporary India – Shri Narendra Modi – who exuded his love for sound broadcasting and proved that he was duty bound to build an unbreakable bond with his electors through All India Radio. I would not even be oblivious of the affection showered on me by the mandarins of Prasar Bharati among whom I found friends and guides in abundant measure. The Ministry always stood by me and strengthened my resolve to resuscitate a moribund radio.

It has been an incredible 38-year-long journey, which has just begun. I hope that you will continue to keep aloft the banner of Public Service Broadcasting where altruism tolerates very little hedonism.

Wishing you all the very best, 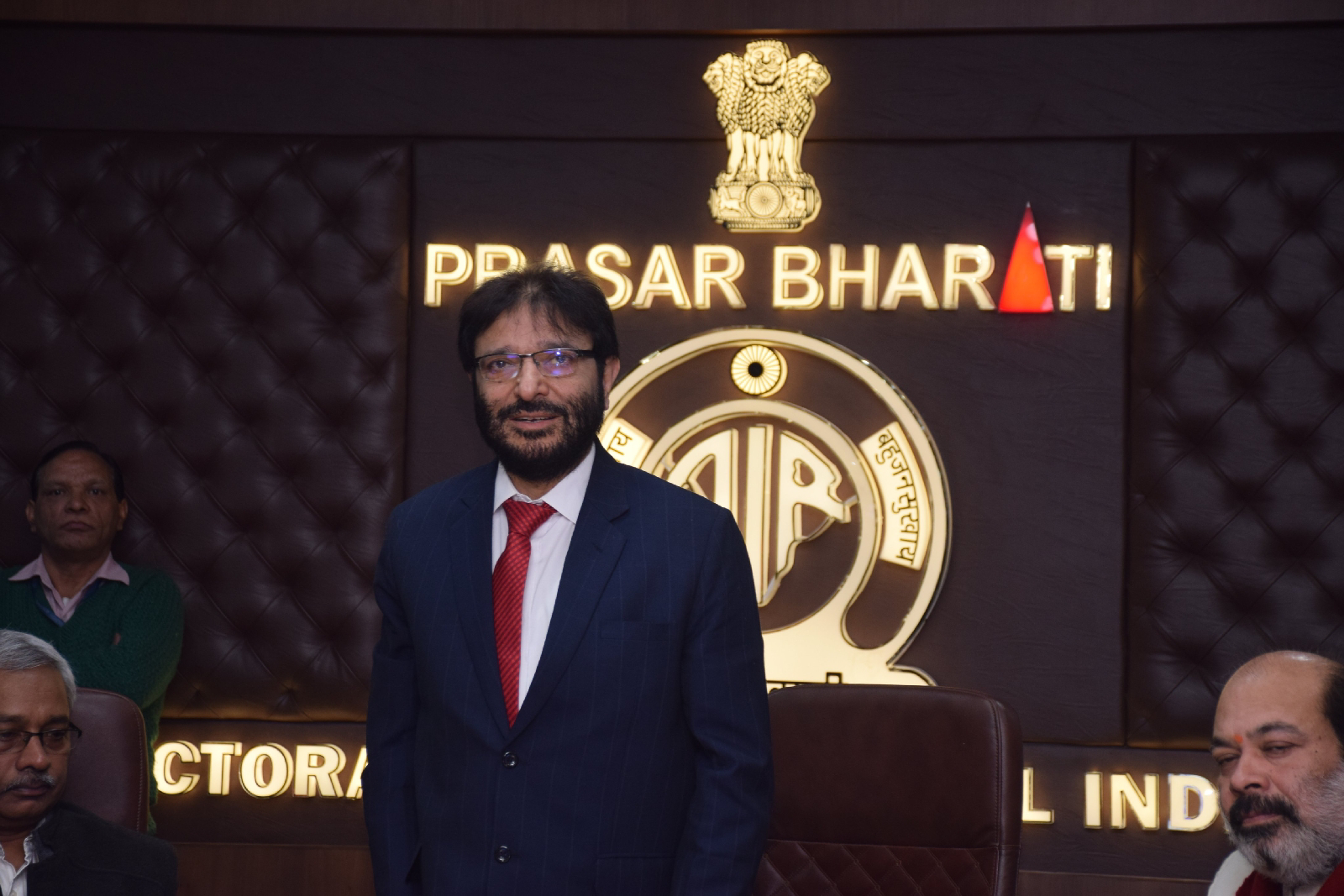