Posted by akashvanisamvaad at 11:37 No comments:

The Prime Minister had embarked on his mission to communicate a vision of New India, backed by a powerful mandate of the people of India way back on Vijayadashami Day in October, 2014. Down 53 episodes in the first installment on the Radio, the people of India were privy to his exhortations with dignity and wisdom to stand for values that had defined Indian Democracy, its Culture and its Traditions speaking clearly of its bright future and the great cause of humanity. The people of India, thus became the beneficiaries of an inspiring democrat who knew how to communicate for solace and well–being. 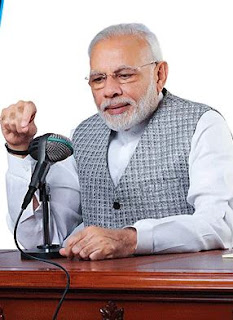 Not all leaders are born to speak with a velvet tongue. “Famous leaders are known for their skilled communication” says Alan Hall in his article “The Top Communication Traits of Great Leaders” . “It is one of the most vital traits they must have. Whether the news is positive or negative, they know it is best to be  forthright, honest and timely. How do these leaders communicate? Thoughtful leaders communicate through meetings, speeches, emails, tweets and phone-calls. They write blogs, articles and deliver information via the media. Their topics include  information, vision and strategy. They nurture values and culture. They note accomplishments and celebrate progress. They share their plans, goals and priorities and discuss challenges and barriers. They also teach, encourage, inspire and motivate. They express appreciation and gratitude. They reassure and calm those around them. They make requests and pleas. They exude confidence, enthusiasm and integrity. They are articulate and never condescending. They are engaged in such activities hourly, daily, weekly, monthly, quarterly and yearly, and they instruct and teach fellow leaders in any position of responsibility to do likewise. As they communicate effectively, these epitome of servant leaders (pradhan sewak)are admired, trusted and  followed.
Being the Peoples’ PM, after assuming office for  another term, he had asked for suggestions and ideas for Mann Ki Baat 2.0  through Post Box 111, Phone lines, MyGov, Twitter and this time through Instagram too,  so that no one may be left behind. 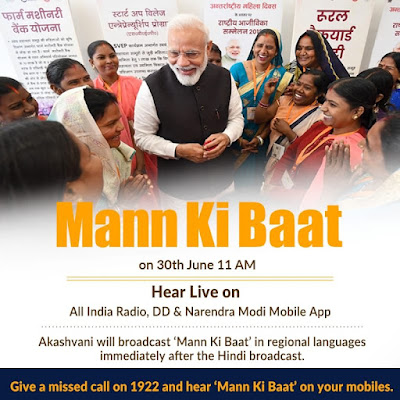 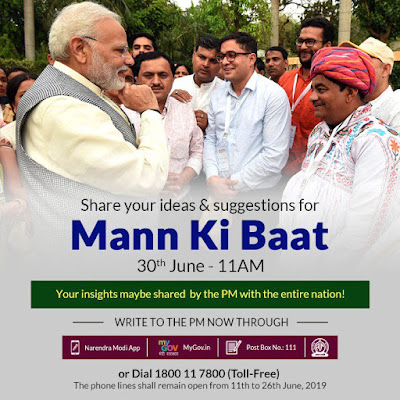 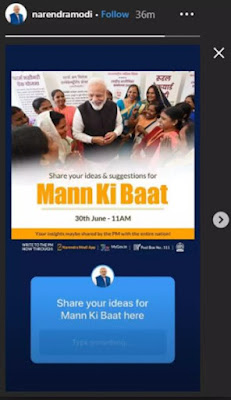 Earlier, the Prime Minister had spoken to the nation on 53 occasions after coming to power in 2014 through his monthly broadcast on Akashvani .
https://www.narendramodi.in/mann-ki-baat

In the final episode which was aired on February 24, 2019 before the commencement of Lok Sabha elections, PM mentioned that the radio programme was a "sublime experience" for him and due to the elections  he would  suspend his monthly broadcast for March and April, 2019 keeping in mind the healthy democratic traditions.
History abounds in instances of leaders moving crowds with the power of words of which 'Mann Ki Baat' is an example of the  ingenious and influential communication platform created by Prime Minister Modi. Resuming Mann ki Baat programme on June 3oth was again Sh Modi’s tribute to the efficacy of All India Radio which organized the broadcast to create a bridge between the elected and the electors in the true pursuit of democracy and in keeping with the cherished principles of Public Service Broadcasting operating in the world’s largest democracy. 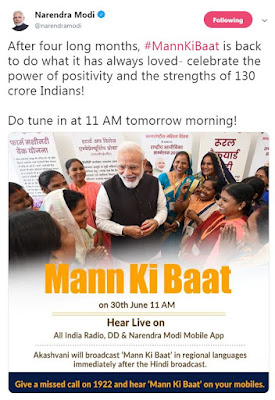 "After four long months, #MannKiBaat is back to do what it has always loved- celebrate the power of positivity and the strengths of 130 crore Indians! Do tune in at 11 AM tomorrow morning!" said PM Modi in the tweet.

The Social Media Handle of the Directorate General of All India Radio @AkashvaniAIR began a series on recapitulating important messages from earlier episodes of Mann Ki Baat (2014-2019) like use of khadi, experiencing the diversity of India , misuse of antibiotics, being fit etc.

A round up of earlier episodes was put out on Twitter by the PM with  tweet lines :

Four months, thousands of letters, mails and suggestions…
It has been a long time.  I have missed #MannKiBaat and am glad we have once again connected through the radio. Here are some thoughts on the last four months. #MannKiBaat

As the day approached for the broadcast the air was abuzz with the expectation of PM speaking again on Radio to the people whom he acknowledges to be the inspiration and calls them a family.
Many Ministers including Minister of Information and Broadcasting took to social media urging  people to listen to PM's 'Mann ki Baat'. 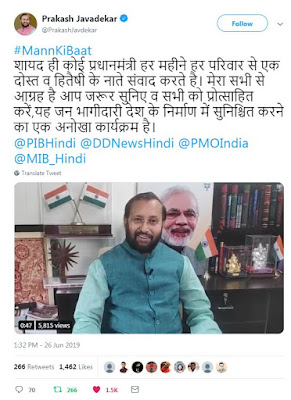 And finally the D Day arrived - Akashvani beamed the first of the second term and 54th edition of Mann Ki Baat started with India’s Prime Minister who rose from the ground and refused to fly above his people and preferred to be known as servant rather than the master.

Mann Ki Baat gets radiated for individual listening and clusters of listeners through Radio Waves, Internet, DTH, Visual Signals. It is also receivable through mobiles and Alexa Voice Command Devices. 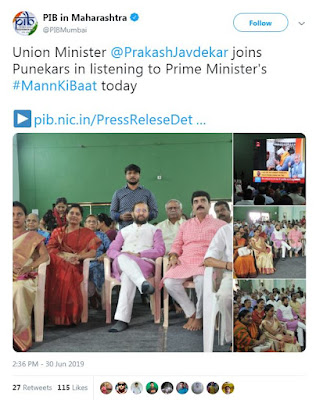 Expressing his urge to connect with the people of the country, Prime Minister, in his first address of Mann Ki Baat 2.0, said ,”This Sunday has made me wait so much”. Further on, among many topics, the Prime Minister spoke on urgency in water conservation, urging people to cultivate habit of reading in ‘Google guru’ era,  reiterated his policy of "no bouquet, just a book" . Speaking about Premchand's stories that depict human emotions , PM said that it is a reflection of entire India  although these stories are a century old. Stressing on the importance of water conservation, he urged  people to make water conservation a 'Jan Andolan' and makes  3 requests to solve water crisis in the country:  to create awareness on water conservation, share knowledge of traditional methods of water conservation, and share information on individuals or NGOs working on water underlining that end goal is to save every drop of water.  He spoke about having written letters Gram Pradhans on the importance of water conservation and how to take steps to create awareness on the subject across rural India. Jal Shakti Abhiyaan was launched the next day by the Union Minister for Jal Shakti , Sh Gajendra Singh Shekhawat. 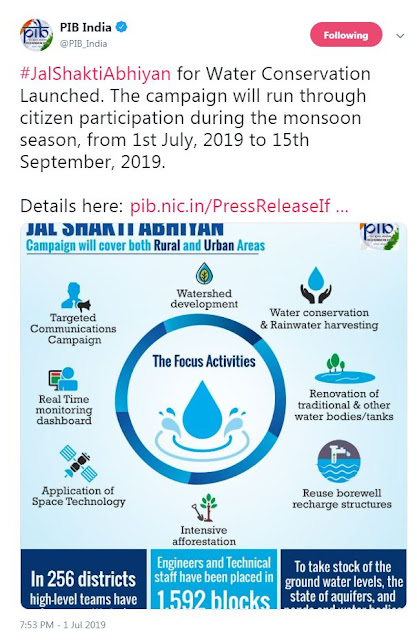 The other points that PM touched upon was on  International Yoga Day that was observed recently on June 21 saying "Yoga was not just practiced everywhere, but was also celebrated collectively"  and "The announcement of Prime Minister's Award for contribution to the field of yoga, was a matter of great satisfaction for me in myself. This award has been given to many organizations around the world" Mentioning about the ’not so ordinary’ mails, letters received and posts on the website clearly spells out that 130 crore countrymen wish to strongly and actively be a part of the nation’s progress." If people share their problems, they also share ways to overcome those problems…. And that there never was a letter  related to Mann Ki Baat ‘ where people are asking me for something that is for themselves. People talk about the larger interest of our nation and society’.

Congratulating the Election Commission and the women who participated in exercising their franchise in the celebration of democracy the PM reminded the country of Emergency days. "When Emergency was imposed, resistance against it was not limited to the political arena or politicians; the movement was not curtailed to the confines of prison cells. There was an outrage in the conscience of one and all. Every citizen had this feeling that something was that belonged to them had been taken away. The collective torment on the loss of democracy was evident"

The time 11 am on the remaining Sundays on the Indraprasth Channel and FM Rainbow Channel of All India Radio, Delhi is the time for Post Box 111. For the last five years All India Radio, Delhi has deliberated on inspiring thoughts and various issues mentioned by PM in his monthly address, one by one,  in more than 200 episodes for its listeners spread across its foreign and domestic base.

Yesterday, the saga began with a programme,  echoing the concern of Prime Minister regarding Emergency, in  a conversation with Sh Kumar Prashant, Chairman, Gandhi Shanti Pratishthan on Emergency in India during 1975 to 1977, Sh Kumar Prashant had spent 19 months in jail during Emergency. He has also written a book based on Jai Prakash Narayan’s thought and philosophy. Keep following the twitter handle for more information on different episodes of Post Box 111. 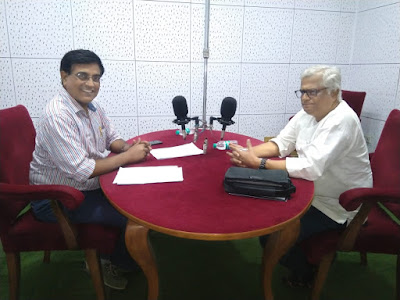 Radio stays relevant for all kinds of people, radio has authenticity with listeners  and has earned their love and trust like a companion –the undisputed leader.
54 Episodes and continuing, at 11 am on last Sunday of every month with countless stories and  unprecedented inflow of inspiration. The Journey continues - Akashvani together with the Prime Minister of India - cherishing  the victories of the common man with one goal : Celebrating a New India -------------- the India to bear torch for the comity of nations.