*****
You Tube Link: https://youtu.be/Q3QcgXnfbI4
Posted by akashvanisamvaad at 11:47 No comments: Links to this post

ABU Prizes 2016 (Radio)  included six categories 1. Drama  2. Documentary, 3. News Reporting,  4. Community Service Announcement (CSA), 5.  Interactive Programmes and  6. Innovative Programmes. AIR had submitted four entries - in Drama, Documentary, CSA and innovative categories. AIR has submitted its entries in all the four categories and won First Prize for CSA.
The selected programme is an 89 second spot in Hindi language on  the dwindling forests and  gradually decreasing habitat of tigers,  reflecting through the notes inscribed by the successive generations of tigers in a diary format on their  gradual decreasing numbers due to apathetic behaviour of human beings .

You can watch the video below and share it

Posted by akashvanisamvaad at 19:47 No comments: Links to this post

The two day BRICS Summit concluded yesterday with the adoption of the Goa Declaration. In the 109 point Declaration, the five nations- India, Brazil, Russia, China and South Africa unanimously condemned terrorism and recognised it as a global threat. Stressing that it is the responsibility of all states to prevent terrorist actions from their territories,  the BRICS leaders called upon all nations to adopt a comprehensive approach in combating terrorism. They condemned the recent terror attacks against some BRICS countries, including the Uri terror attack in India.

Prime Minister Narendra Modi alluded to Pakistan while speaking at the Summit, calling it the mother-ship of terror. He said it is unfortunate that India has an immediate neighbour which shelters terrorists. In his concluding statement at the Summit, Mr Modi said BRICS nations agreed that those who nurture terrorism are as bad as terrorists.

Our correspondent reports besides terrorism, putting the global economy back on track was another focus point of the deliberations. All countries were united in their view to establish BRICS Agri Research Platform, railway Research Network, Sports Council and various youth centric fora. The countries also agreed to fast track the setting up of a BRICS Rating Agency.

An agreement was signed between the five nations on BRICS Agriculture Research Centre. Two agreements were announced relating to milti cooperation in diplomatic academy and regulation for customs cooperation among BRICS.

Addressing the BRICS-BIMSTEC Outreach Meeting later in the evening, Mr Modi said a clear message must be sent to those who nurture terror that they will be isolated if they do not mend ways. Pointing that BIMSTEC region is prone to natural disasters, Mr Modi said environment protection and disaster mitigation are areas where BRICS-BIMSTEC partnership will benefit millions. 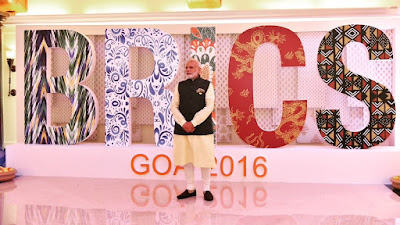 Speaking on the occasion, Bangladesh Prime Minister Sheikh Hasina said all countries must join hands to deal with terrorism and violent extremism.

In her speech, Myanmar Foreign Minister Aung San Suu Kyi said her nation wholly sympathises with Indian people with regard to terror attack in Uri. She spoke of Myanmar's struggle with extremism and conflict that has cost many lives. Bhutan Prime Minister Tshering Tobgay said terrorism remains a grave threat to global peace, security and stability. Mr Tobgay said India has over the past few months suffered frequent terror attacks.He said his country stands in solidarity with India and like minded countries in fight against terror.

Sri Lankan President Maithripala Sirisena said peace and stability in the region are important elements for economic prosperity. Mr Sirisena strongly condemned terrorism in all forms and emphasised that his country is firmly committed to join all efforts to combat terrorism.

Nepal Prime Minister Pushpa Kamal Dahal said BRICS and BIMSTEC nation must collectively condemn and fight against threat of terrorism in all forms and manifestations. He said cooperation in education and human development sector could be beneficial to both BRICS and BIMSTEC groups. 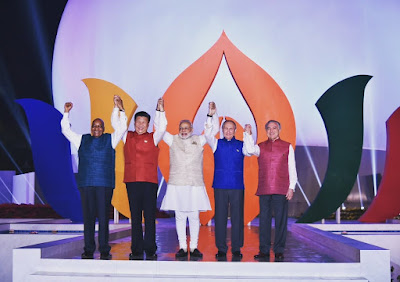 India and Brazil share a very close and multifaceted relationship at bilateral as well as  plurilateral fora such as IBSA, BRICS, G-20, and G-4. Bilateral relations between India and Brazil have acquired the dimension of a strategic partnership in the last decade. Brazil is one of the most important trading partners of India. However, negative impact has been felt in the bilateral trade following the economic recession in Brazil last year. There is enormous interest in India’s culture, religion, performing arts and philosophy. Yoga, Ayurveda,  and Indian movies are popular among the Brazilian people


Reprot by : Vivek, AIR Mumbai
Posted by akashvanisamvaad at 11:18 No comments: Links to this post

CHANGE OF COMMAND OF WESTERN FLEET 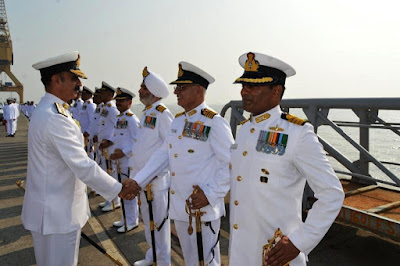 Rear Admiral Ravneet Singh had assumed command of Western Fleet on 10 Oct 15. During his tenure, the Western Fleet was deployed for several operational deployments including numerous multinational exercises with friendly foreign navies. The Fleet also undertook overseas deployments to Colombo, Male, Persian Gulf, Western Indian Ocean littoral nations and East/ South Africa. The Fleet had also participated in the International Fleet Review off Visakhapatnam. Rear Admiral Ravneet Singh is slated take over the responsibility of Chief of Staff, Western Naval Command on promotion to the rank of Vice Admiral later in the month. 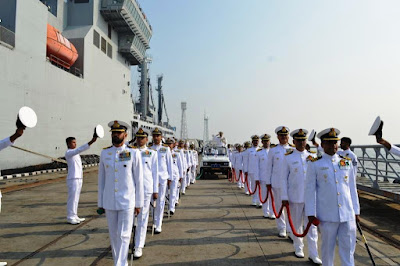 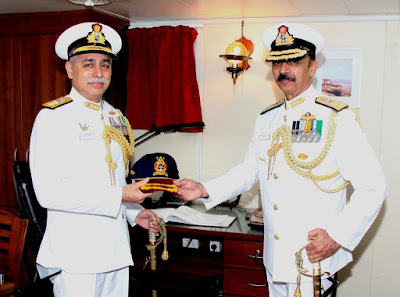 Rear Admiral RB Pandit was commissioned into the Indian Navy in Jul 1984. An alumnus of the National Defence Academy, Khadakwasla, Defence Services Staff College, Wellington, the College of Naval Warfare, Mumbai and the Royal College of Defence Studies, London, the Admiral is a specialist in Anti Submarine Warfare. The Admiral has held several key appointments in his naval career including Command of missile corvette INS Nirghat, frigate INS Vindhyagiri and the Landing Platform Dock INS Jalashwa. On promotion to Flag Rank the Admiral held coveted appointments of the Assistant Chief of Naval Staff (Foreign Cooperation and Intelligence) at Naval Headquarters and Chief of Staff Southern Naval Command, prior assuming Command of the Western Fleet.
*** 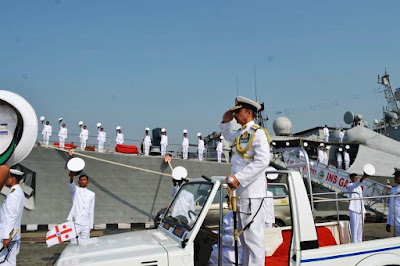 Report by : Vivek, AIR Mumbai
Posted by akashvanisamvaad at 17:48 No comments: Links to this post

The winners of  Akashvani Annual Awards  2015 were announced today by Sh. F. Sheheryar, Director General, a short while ago in Akashavani Bhawan in New Delhi.
A total 98 entries in different categories were received from different AIR Stations. The jury comprising emminent experts  listened to these entries during the jury session organised from 4th to 6th Oct, 2016 and  recommended the winners. 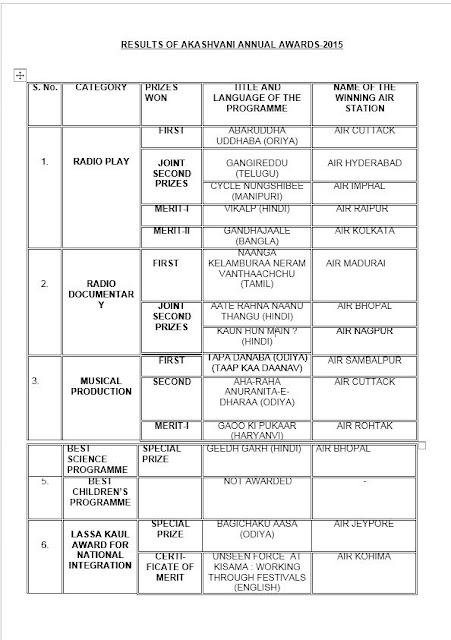 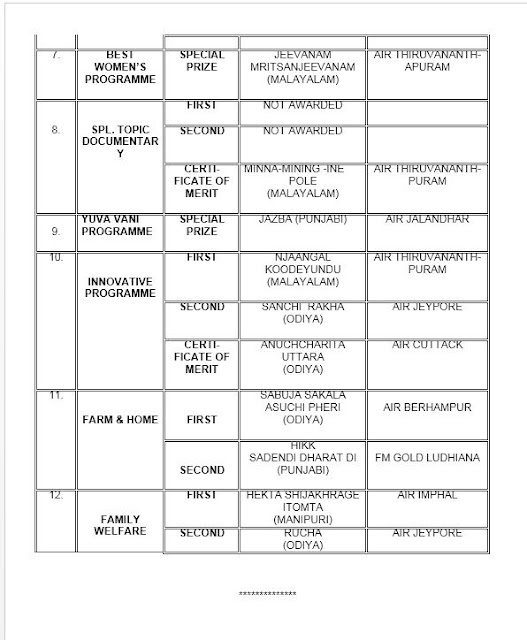 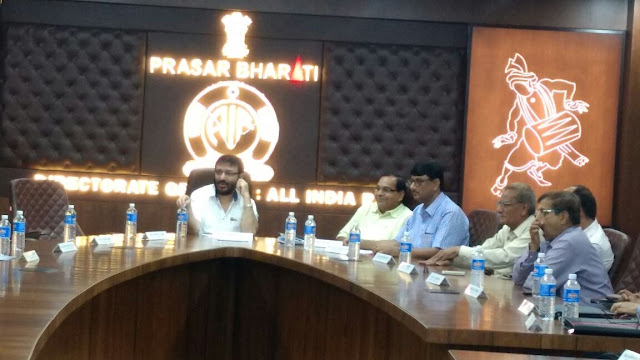 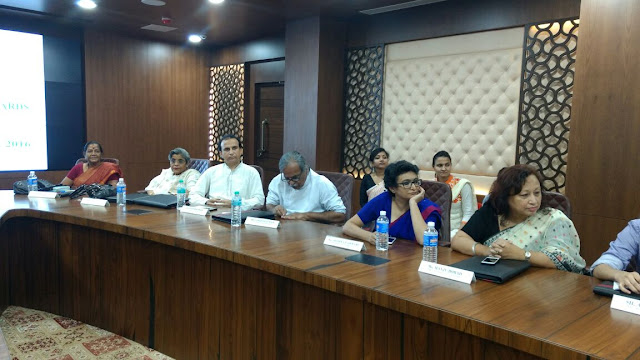 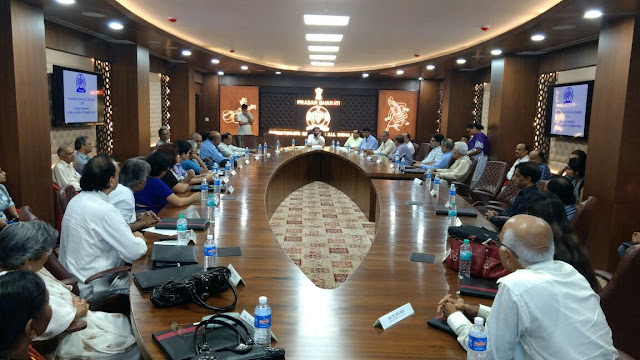 Posted by akashvanisamvaad at 16:46 No comments: Links to this post

The Maharajas' Express by IRCTC embarks on its maiden journey of the season.

The Grand Royal on wheels will be operating six different itineraries between October'16 to April'17 to selected destinations in which the travelers can choose their 'Gantavya' on their own. 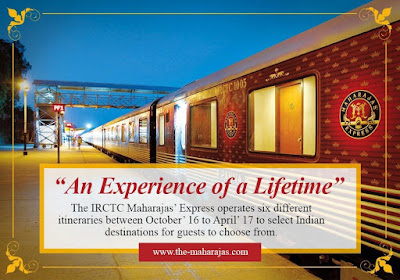 Indian Railways added another ‘grand on wheels’ to their luxury trains fleets in the year 2010. And this time it was the Maharajas’ Express. The train would offer a grand India tour experience to the travellers in which they can enjoy a pan-India tour crisscrossing some of the most enchanting destinations permeated with diverse culture, tradition, colour and way of living. The train was first introduced in the year 2010 and within just a few years of its inception it got an international repute for its offering of seamless journey experience. To share with the global travellers a more amusing voyage romance, this royal Indian train has introduced 5 new journeys in its upcoming schedule. All the 5 journeys are distinguished from each other, though their basic motive is one to make the guests enjoy a grand and royal vacation in India amid world class luxury and sophistication.

Bon Voyage!
Posted by akashvanisamvaad at 11:13 No comments: Links to this post