"I remember that every house in our neighborhood would play 'Mahisasurmardini' at the crack of dawn and later end up with a cup of tea, samosa or kachauri and jalebi afterward," 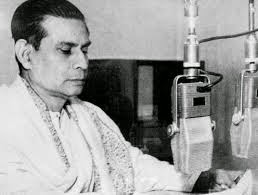 Over two decades after playwright actor and director Birendra Krishna Bhadra passed away, his voice continues to mesmerise All India Radio listeners. Bhadra's inimitable style of reciting the 'Mahisasura Mardini' (The annihilation of the Demon) has been broadcast on AIR since 1931. This year too, the official radio station aired early this morning, the holy verses narrating story of Goddess Durga's descent to earth. The day is called Mahalaya. "I remember that every house in our neighborhood would play 'Mahisasurmardini' at the crack of dawn and later end up with a cup of tea, samosa or kachauri and jalebi afterward," says Suchismita Chakravorty, a housewife in Kolkata. "Mahalaya means Durga Pujo, one of the most eagerly waited festival of the Bengaliis just around the corner! Ma aschhen (the Mother is coming)," says Chakrovarty. Bhadra's 'Mahisasur Mardini' first aired on radio in Kolkata. The program was organised by Premankur Aatorthi, Birendra Krishna Bhadra, Nripendra Krishna Mukhopadhya and Raichand Boral."Perhaps no other festival in the world has a week long curtain raiser to the actual festivities. The curtain raiser starts with of course 'Mahisasur Mardini' on AIR. Yes. Pujo is here," says Prabuddha Neogi a profesional working in the city. The one-and half-hour radio program comprises a montage of recitation of scriptural verses along with Bengali devotional songs, classical music with a dash of acoustic melodrama adds up to building the rhythm to the four day fest. "The rendition by Birendra Krishna Bhadra on All India Radio still gives me the chills. Nobody else can match his style and I don't get the feel of the festival unless and until I listen to it," says Arun Kumar a journalist who has been living in the city for over two decades. The program which began as a live performance was later pre-recorded and played on the radio since 1958. It has also been translated into Hindi to similar orchestration and is broadcast at the same time for a pan-Indian audience. "Mahalaya is the day when the process of creating idols of Durga are on the verge of completion and some are transported to various pandals or homes. An unexpected morning sight of idols being carried along the Ganga Ghats with Bhadra's rendition playing loud is a delight," says Dipa Das,a student. So popular is Bhadra's version of the recitation that when in 1976, the voice of Bengali cinema stalwart, Uttam Kumar was employed for the programme, it did not get similar responses. Listeners also say that dawn of television has not dimmed the charm of Bhadra's rendition. "The present program on television on the enactment of 'Mahisasur mardini' is not that good. Doordarshan Bangla had once aired the dance drama with the original rendition of Bhadra, which was wonderful," says Kumar.