It was a moment of joy and surprise not for the family but for the whole nation when the news of only survivor of Siachen Avalanche Lance Naik Hanamanthappa flooded the social media platform on 8th February 2016. He was pulled out at 7:30pm on Monday from the  avalanche-hit army post in the Siachen glacier in Jammu and Kashmir at an altitude of 19,600 feet . Of the 10 soldiers buried, nine other could not survive. He was the only survivor of the tragedy.

Today, the brave soldier passed away at 11:45 am after a long fight with the death.

After being under 35 feet of ice for six days, the young 33 year old Koppad had miraculously survived and was referred with the hashtag #SiachenMiracle.

Lance Naik Hanamanthappa Koppad was the soldier of the 19th Battalion of Madras Regiment and is survived by his wife Mahadevi Ahok Bilebal and two year old daughter Netra Koppad. He was the resident of village Betadur in Dharwad district of Karnataka, and had joined the army 13 years back.
Nation mourns at the death of this brave soldier. It is a great loss for the country!

"Soldiers have told me he was a true warrior, had no fear of death, but had a love for life.
They said the safest place to be was with him..."  Russell Hawkins 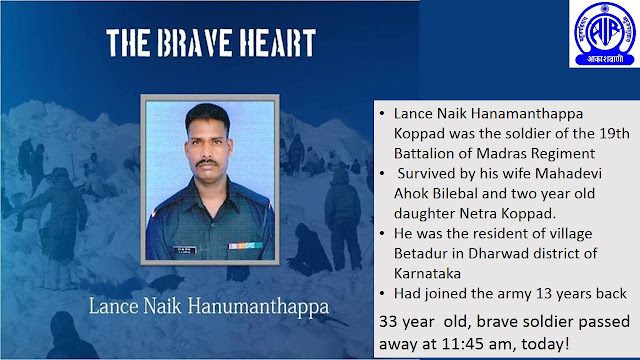