AIR’s ‘A Musical Legacy’ strikes a chord with audience

On 8th November, 2015, Akashvani hosted her second show of 'A Musical Legacy', this is held every month. National Channel of All India Radio’s musical heritage show, “A Musical Legacy” has become a huge hit among music lovers as they listen enthralled to classical jugalbandi between famous father and son duos every month.

“Music is a therapy and cures people suffering from unknown illness”, Pt. Rajan said, adding that such events promote not only inter-generation legacy but also showcase skill learnt over centuries from forefathers. His brother, Pt. Sajan added, “AIR’s attempt to bring forth father and son together on the same platform is remarkable and worthwhile.” The first concert of “A Musical Legacy” series was inaugurated on October 28 this year and featured Santoor Maestro Padamshree Bhajan Sopori and his son Abhay Rustum Sopori.

“The show is interesting and is being loved by all people especially classical music lovers. Since AIR has always organized musical shows to promote rich cultural heritage of India, this musical legacy is the first of its kind where both fathers and sons perform on the same stage” said Fayyaz Sheheryar, Director General, All India The programme, a part of Prasar Bharati mission Bahujan Hitaya, Bahujan Sukhaya, highlights AIR’s commitment towards promotion of musical culture of India and entertainment of masses. 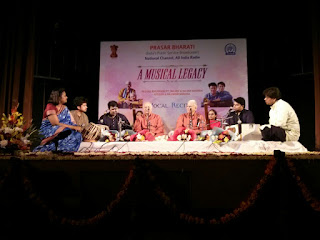 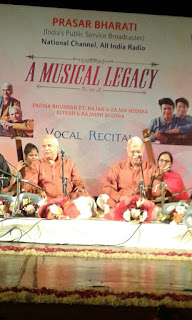