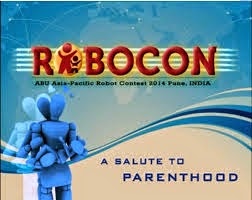 The Minister for Information and Broadcasting, Shri Prakash Javadekar will inaugurate the 13th International ABU Asia-Pacific Robot Contest (ABU-ROBOCON) on 24th August, 2014. ABU-ROBOCON 2014 is being organized by Doordarshan at the Badminton Hall, Balewadi Sports Complex, Pune from 22-26th August, 2014.

ABU-ROBOCON is a unique TV program project where students compete with their hand-made robots. The contest aims at encouraging scientific temperament of undergraduate engineering students in the Asia-Pacific region. These events also offer opportunity to broadcasting agencies for advancing their technological skills and international cooperation.

This year, broadcasters and ROBOCON teams from 17 countries will be participating in this contest. Prominent participants include Japan Broadcasting Corporation (NHK), Russia State TV & Radio Broadcasting Company (RTR) and Egyptian Radio and television Union (ETU). The theme of ABU-ROBOCON is “A Salute to Parenthood”. Under this theme, a Manual (Parent) Robot takes his/her automatic (child) Robot to a park for games like Sea-saw, swing, pole-walk and jungle gym to be played within a period of three minutes. On the sidelines of this event today, TVRI Indonesia and Prasar Bharati will be holding a meeting for mutual cooperation in the field of broadcasting and exchange of programme and News content.

ABU-ROBOCON is organized by Asia Pacific Broadcasting Union (ABU) and its member countries including Doordarshan. It was started in the year 2002 in Japan. Doordarshan has been a part of this venture right from its inception. This is the second time that Doordarshan is hosting an International event after 2008.

In the 13th National event that took place from 6-8 March 2014 at Pune, 89 teams from engineering colleges/universities including seven IITs participated. ROBOCON team of Nirma University, Ahmedabad emerged victorious and VJTI Mumbai was the 1st runner-up. The two teams would be participating in this International contest.
Posted by akashvanisamvaad at 17:35