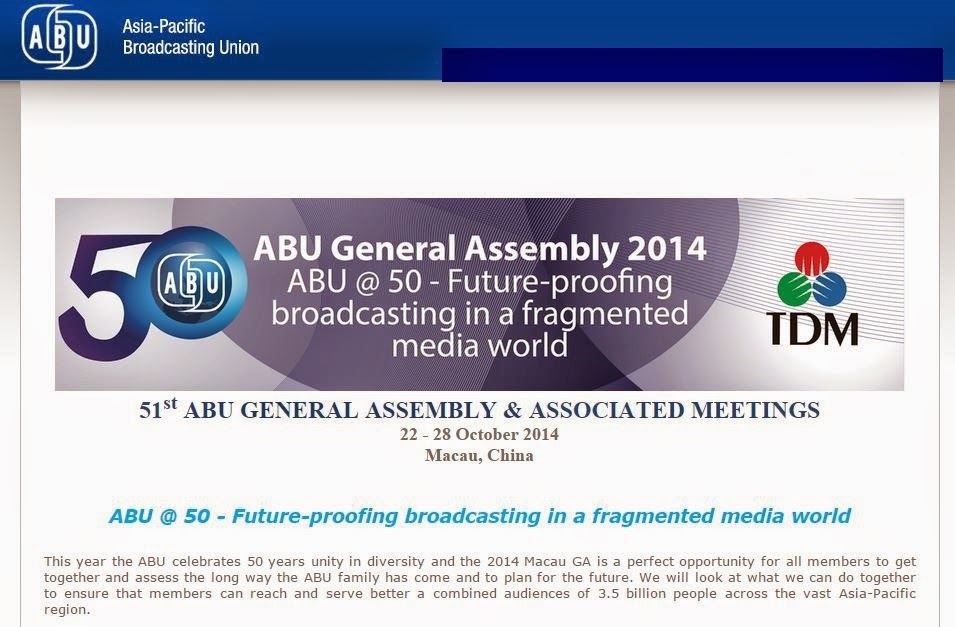 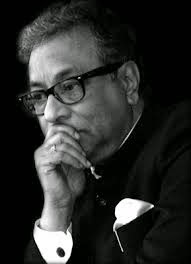 When our PM gained world attention by his recent high profile visits, the message was clear to world Community.  India is no more a follower and her aspirations are global in thinking and reach. ISRO's Mangalyaan to Mars reinforced its position of authority unambiguously.  Clearance of Pending Defence ventures is a sharp step forward to break away from deplorable delays of past.  It is a matter of  time that bigger investments get attracted to strengthen the country's economic base to its full advantage in the near future with all round stability.

Going by the spirit of meaningful presence and authority to achieve higher deliverables in world fora, India needs to be part of decision making in Asia Pacific Broadcasting Union(ABU), a non profit, non govt. professional association of Broadcasters where India is a founder member since 1964 with AIR and Doordarshan. ABU has 264 members in 61 countries reaching a potential audience of 3.5 billion people providing a forum promoting collective interests of TV and Radio broadcasters internationally funded primarily by members, ABU remains the hub of harmonisation of technical broadcasting standards and systems, skill and technological development as also information exchange.ABU is the third largest of world's eight broadcasting unions, representing largest geographic region  in the world. Its Sports Department negotiates TV rights for major sporting events like Olympics and Asian Games,World Football Cup besides several other related activities.Prasar Bharati(PB)has immense stakes in ABU as India's national public service broadcaster.

ABU's real worth fading out from PB's memory and withdrawal from international cooperation and leadership  when its CEO left Vice Presidentship in 2006 was hardly noticed in India.  With loosened grip and brewing internal disturbance, PB, which pays Rs 50 Lakhs annual subscription, was not even represented in ABU's general assembly held in Tokyo and  hence conveniently lost the vacant seat of Vice President to Pakistan by default in 2010. To add agony to PB in internal disquiet, Sports Rights which were earlier offered to PB on exclusive basis were unbundled and given only 'free to air rights'  to accommodate ESPN thus ending long and continued spell of exclusivity.  The reason, none from PB was deputed  when the Sports Group Body of ABU was discussing acquisition of rights for Asian Games 2010! It is tragic that India hosted ABU's General Assembly in 2011 after 15 years in a routine, officious and less concerned mode with minimal participation and missing both the posts of Vice Presidency and a seat Membership on the Council.  In 2012, President of Korea inaugurated ABU's General Assembly in  Seoul and called all the Big Eight members for a private tete-tete, but in 2011 PB could not even impress upon our I&B Minister to inaugurate the Session in Delhi.

In an attempt to regain lost glory and opportunities , Jawhar Sircar, CEO, PB led a three members contingent to Seoul General Assembly in 2012 and got Doordarshan re-elected as technical bureau member and AIR to ABU Administrative Council unanimously.  Rightfully, being member of Administrative Council, PB then eligible for ABU Vice President was however  trounced by Turkey Radio And Television Corporation which had taken a delegation of 20 against India's two.  PB had no chance at all when all the countries like Myanmar, SriLanka, Cambodia, Thailand, Macau and Hong Kong take 4 to 18 delegates to canvass and manage better deliverables. NHK Japan had  41 delegates, Korea 21 and China 22 in Hanoi General Assembly in 2013.

For the current Macau Convention and General Assembly, Prasar Bharati deputed its CEO, Shri Jawhar Sircar. Even this year the delegation has been only of two members with one adviser.  The delegation from other member countries are much larger.  The major countries like Japan, China, Hong Kong, South Korea have 40+ delegates and also delegates from smaller countries are pretty big – Malaysia-30, Srilanka-9, Afghanistan 8, Bhutan-5, Bangladesh -7, Mangolia-7, Thailand-35, Turkmenistan 15, Kazakstan-6, Singapore-13.

Defying all odds of practically no canvassing time, Shri Jawhar Sircar, CEO, Prasar Bharati, has won Vice- Presidentship which is attributable to India’s emerging image heralded by conspicuous  and bold initiatives of our Prime Minister and administrative acumen of seasoned CEO, Prasar Bharati.