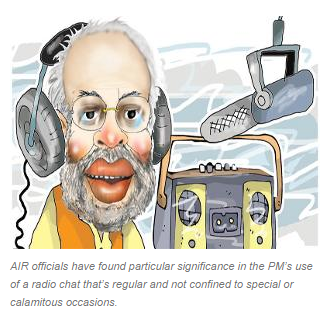 This is All India Radio... the Prime Minister will now speak...

Akashvani, once an information lifeline to a poor, communications challenged country, is hoping that fortnightly prime ministerial radio chats with the nation will remake its brand. The first of Narendra Modi's Akashvani-only chats will happen on October 3, this Friday.

The PM's unusual decision to talk to Indians only via Akashvani guarantees high degrees of national attention.

The regular periodicity — once a fortnight — the suggested informal nature of his address, the fact that the PM intends to invite suggestions from citizens, combined with Modi's rhetorical abilities, will be a big draw, so the sarkari radio broadcaster hopes. And Akashvani is taking no chances.

Officials familiar with preparations who spoke on the condition they not be identified told ETthat the broadcaster is setting up a studio inside the PM's official residence, 7, Race Course Road. This in-house studio facility, incidentally, is the same arrangement the US president's Oval Office has. "The last mile optical fibre has already been laid," says a person close to the development.

The PM's chats will reach almost all of India. Though suffering in terms of its brand image, Akashvani retains the distinction of having the largest geographical reach — All India Radio reaches 99.20% of India's population and covers 92.6% of the country's area.

AIR officials have found particular significance in the PM's use of a radio chat that's regular and not confined to special or calamitous occasions.

"PMs and presidents have used the radio on occasions such as the Republic Day or the Independence Day or during a calamity. This is something different," says F Sheheryar, director-general of AIR. "We are told he will be doing this once every fortnight."

Doordarshan, the state TV broadcaster, will act as a force multiplier for AIR's broadcast of Modi chats. DD, with a 90% all-India reach, will carry AIR's audio feed. Officials say private FM channels may also carry AIR's feed. ET could not independently confirm this.

Regular radio chats were first used by US President Franklin D Roosevelt. His fireside radio chats, which came at a time the radio was what TV is today, are considered to have been a very effective means of communication.

Americans at that time had to cope with effects of the Great Depression and World War II.

US President Ronald Reagan, ex-Hollywood actor and considered a master communicator, revived the tradition of radio chats in 1982. Current White House incumbent Barack Obama is more attuned to technology - his weekly chats are on video.

But many broadcasting professionals argue the radio is on a comeback. "All over the world there is a swing back to the radio," says Jawhar Sircar, CEO, Prasar Bharati. "That is because radio is a non-intrusive medium, doesn't consume all your senses." The advantage of radio may be that it works as a medium even when it's in the background - a quality appreciated in a world where everything from TV to Twitter demands full attention when one accesses them for information.

Abraham Koshy, professor of marketing at the prestigious Indian Institute of Management, Ahmedabad says radio is a powerful medium but hasn't been used effectively by anyone so far.

"Radio is very subtle. It touches the heart. An address by Modi through the radio is a good idea as he will be able to reach almost all of India," says KP Singh Deo, former information and broadcasting minister in a Congress government in the 1990s.

Sircar says Modi's chats are "a unique opportunity for us to showcase the potential of radio." However much of AIR's radio infrastructure today is still geared towards analogue medium wave (MW) signals. MW's reach is more, but quality is low.

Sircar says a massive plan is underway to send all content that they have on MW parallely to FM. The problem, however, is that for every one MW coverage circle, AIR would need to set up five FM coverage circles.