The 11th edition of the Junior Hockey World Cup for men has set its foot in Lucknow, Uttar Pradesh. The hockey fever has hit the State on 8 December, 2016 which will continue till 18 December, 2016.

The top 16 teams in the World are vying for the title over a total of 44 matches which will be held over ten days.  The matches are being played at Major Dhyanchand Stadium, Lucknow. 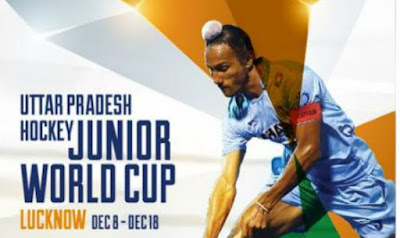 This is the second time that India is hosting Men's Junior World Cup Hockey Tournament, and for second successive time it is being held in India.
New Delhi hosted the last edition in 2013, where Germany claimed their sixth title beating France 5-2 in the final.

The host team India has stunned everyone with their consistent performance so far in the championship. Indian team started off their campaign on a winning note by defeating Canada by 4-0 in their opening Pool D match on 8 December 2016.

India recorded second win over Team England on 10 December 2016 at Major DhyanChand Stadium, Lucknow. Host team won the match with 5-3 and carved a clean win over England. India secured their place in the Quarter Finals.

India’s third straight win was against South Africa. The match was played on December 12. India defeated SA by 2-1.

India then faced Team Spain in the Quarter Finals and once again sparked the sky by winning their game. They won the match by 2-1.
India will now face Australia in the Semi-Finals today at 6pm.