Of Guns and Roses…and Radio Stations

On 31st July 2016, All India Radio, Aizawl celebrated Golden Jubilee. The station has a vibrant  rhythmic history. Basudha Banerji, Programme Executive, Central English Features Unit, DG:AIR, Delhi, shares glorious legacy & raison d'être of the station...Read on to find how All India Radio has always been one up in community service.

Surely, this is the stuff of legend – the setting up of a government-run radio station amidst a full-blown militant movement in the North-east that declared war on the Indian Union!

On 31 July this year, the legend turned golden, and while All India Radio’s Aizawl station celebrated its half-century with a befitting two-day cultural extravaganza, it is also appropriate, to rewind to fifty years ago.


In 1966, what we know as Mizoram today was the Lushai Hills District of Undivided Assam. In
March 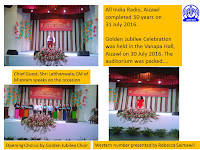 that year, what we call the Mizo insurgency spread like wildfire through the length and breadth of these hills. The times were bloody and disturbing, the shadow of the gun loomed large and the threat to all government-run institutions was only too real.

It was in such trying times that AIR was called upon to start its Aizawl station with a low power Medium Wave transmitter atop a hill in central Aizawl to complement the broadcast of Mizo programmes beaming from AIR Shillong via a Short Wave transmitter of AIR Guwahati. The studios and offices were crowded into a small makeshift Assam Type quarter meant for the Civil Surgeon.


The fledgling radio station faced many threats from underground elements. There were other teething troubles too, the typical challenges faced by our stations in remote tribal outposts, inhospitable and inaccessible terrain. But the show went on.

What was the role played by this small radio station during the 20 years of
insurgency?
“A sterling role - the station moulded public opinion and promoted the much-needed sense of emotional and national integration with broadcasts of widely listened-to entertainment and spoken word programmes, including news,” said C. Lalrosanga, former DG, Doordarshan, and a senior broadcaster who hails from Mizoram.

“A Regional News Unit was set up here in 1975", Mr Lalrosanga adds, “during the national Emergency and the height of insurgency.” The news bulletins have enjoyed credibility and significant listenership, the Aaj Subah programme is immensely popular.

The Mizos are a music-loving people and it was music that made the difference, whether Mizo devotional or Western, love songs or traditional and folk numbers. The music that provided a platform to the local talent, music that knitted feuding factions together. For, “it is music that makes the world a more harmonious place,” in the words of the famous song.