Indian badminton player Srikanth Kidambi progressed to the Quarter finals of the Men’s singles badminton event at the Rio Olympics, 2016 on Monday. He defeated World No 5 Jan Jorgensen of Denmark and left the nation spellbound with his performance.
Srikanth was persuading in his play with numerous attacks and created eminent smashes so as to win the game. 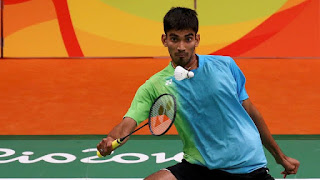 Srikanth Kidambi is currently the highest ranked Indian men’s player in the international circuit with a world ranking of 11 as of August 11, 2016. He won the Arjuna Award in Badminton in the year 2015.
The 23-year old badminton player hails from Guntur, Andhra Pradesh, will now play against two-time Olympic winner Lin Dan on August 17, Wednesday at 6:00 PM.
All India Radio wishes all the best to this great shuttler for the Quarter Finals.

Jeeto Rio
Posted by akashvanisamvaad at 13:41