Everyone around the country woke up on Wednesday, 15th February, 2017 with a certain sense of anticipation and pride as the Indian Space Research Organization (ISRO) was all set to script history with the launch of a record-breaking 104 satellites into space on a single rocket from the Spaceport in Sriharikota, Andhra Pradesh. 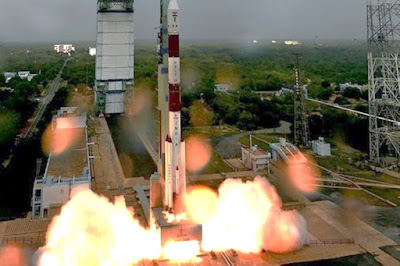 In its 39th flight, ISRO’s (PSLV-C37), Polar Satellite Launch Vehicle successfully launched the 714 kg Cartosat-2 Series Satellite along with 103 co-passenger satellites. The total weight of all the 104 satellites carried on-board PSLV-C37 was 1378 kg.

Of the 103 co-passenger satellites carried by PSLV-C37, two – ISRO Nano Satellite-1 (INS-1) and INS-2– are technology demonstration satellites from India. The total number of Indian satellites launched by PSLV now stands at 46.

Why is the ISRO mission important?
The primary satellite, CARTOSAT-2 will provide remote sensing services. Images sent by it will be useful for coastal land use and regulation, road network monitoring, creation of land use maps, distribution of water, among other purposes.
The two Indian Nano-satellites INS-1A and INS-1B were developed as co-passenger satellites to accompany bigger satellites on PSLV. The primary objective of INS (ISRO Nano Satellite) is to provide an opportunity for ISRO technology demonstration payloads, provide a standard bus for launch on demand services.
The 88 small satellites named “Doves” will be used to image every inch of the earth at a low cost map in super high resolution.

What are the benefits of the launch?
With this launch ISRO will be able to recover half of the total cost incurred for the launch of the 104 satellites.

In his statement President Pranab Mukherjee said, “This day shall go down as a landmark in the history of our space programme. The nation is proud of this significant achievement, which has demonstrated, yet again, India’s increasing space capabilities.” 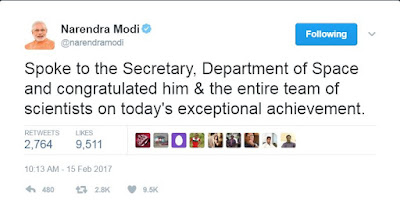 With this launch ISRO has once again proved that indeed the “sky is not the limit”
Posted by akashvanisamvaad at 14:52