For over three decades Nisar Ahmad Dar enthralled audiences with western musical in one of radio Kashmir’s most loved programme. An ardent music lover he is all set to launch his first solo album that will see mix of sufian and western country music. 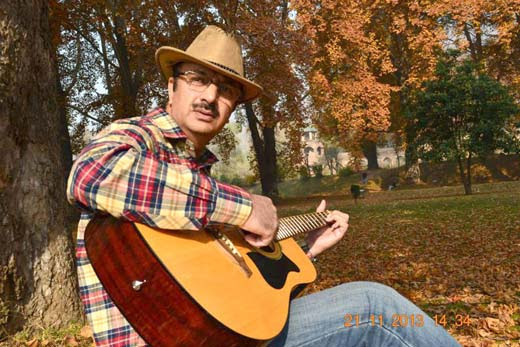 It took Nisar Ahmad Dar more than a dozen auditions to finally reserve some air time for himself at Radio Kashmir. Thirty three years and countless programmes, at the radio station, later Dar an ardent music lover is all set to release his solo music album.
It was 1980 and Dar back then studied Engineering at the then Regional Engineering College, Hazratbal, which now is known to be as the National Institute of Technology. It was during this time that Dar discovered music and radio anchoring back then seemed to be the only viable option to be close to what he loved the most.
The memory of the first cheque of 15 Rupees that he received after anchoring his first Western Music Programme at Radio Kashmir remains etched in his memory, “It was a thrill to earn, to feel independent,” says Dar, who presently works as an Executive Engineer at the I&FC department, apart from anchoring at Radio Kashmir.
Dar attributes his love for music to the time when he discovered western music.
Groups like Beatles, Bee Jees, Eagles and solo singers like Elvis Presley, Dar says, caught his imagination and influenced him greatly.
“I would listen to their numbers over and again. That fascination with music was instrumental in instilling a better understanding of music in me,” says Dar.
He credits his closest friends Syed Parvez Qaisar and Syed Humauyn Qaisar for keeping him abreast with the regular supply of latest western music; they managed to get imported from abroad.
His love for music however did not remain limited to playing tracks for the listeners at the radio station. He took his love for music a notch further and started learning it, beginning with violin under the guidance of Prof Arjumand Durrani.
“Learning music from notations and playing simultaneously was a great experience. It would take long painstaking hours to get a piece straight,” recalls Dar, who later on learned guitar from valley’s only exponent of guitar Irfan Nabi. He admits that learning this time was easier as the basics were already clear.
He terms music as a form of solace for himself. “I might not play the instruments that often, it surely is a medium to keep myself connected with life.”
He says that music helps him to fill the vacuum that is created as a result of the mundane and monotonous routine of the daily life, “It is only music that helps him to unwind and de-stress.”
For Dar the idea of a music album seemed to be just another logical step towards his love for the art form and that’s what he is up to now. He is all set to launch his maiden album ‘wooden heart’ in the month of May/June this year.
The album, based on Sufi poetry of Kashmir and some country as well as pop music, has nine solo songs sung by Dar. Quite optimistic about the launch of the album, Dar makes no effort to conceal his excitement while announcing that the mixing and recording part has already been completed.
“This album will for sure be a refreshing experience for the music lovers of Kashmir,” says Dar, adding that the contemporary music these days has become more commercialised and is devoid of melody.
He is quite optimistic that this album will bring back the melody that is missing in today’s commercialised music industry. Dar however maintains that the venture will not be a money minting one.
“I am doing this for the love of music and I hope this could bring some solace to the music lovers in Kashmir,” adds Dar.
His colleagues at Radio Kashmir, who describe him as a humble energetic man, are equally enthusiastic about his new venture. Some seniors he has learnt from and some junior, who have learnt from him all hoe the best for him.
Syed Humayun Qaiser, the famed producer at Radio Kashmir, describes him as a hard working disciplined man, who takes his work very seriously.
During his 33 years of service at the radio station Dar has worked with almost every big name at the station including Syed Humyun Qasier, Gurmeet kour, Dr Tahaa, and Jasbeer.
“For me he is like a teacher who has taught me a lot as for as the presentation is concerned. He has always been very humble and cordial even to new comers,” says Gurmeet Kour.
http://www.kashmirlife.net/love-of-music0606/
Posted by akashvanisamvaad at 06:23