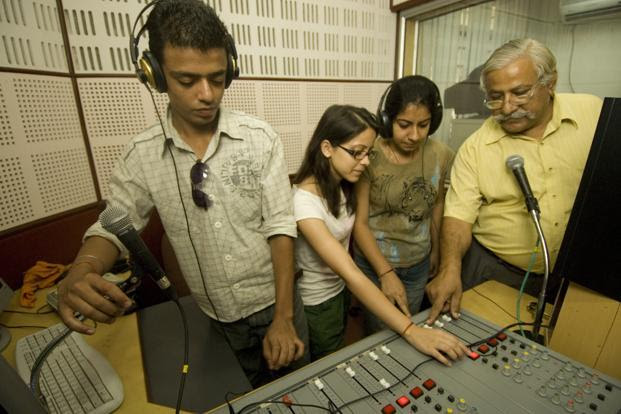 
New Delhi: Arvind Kejriwal and Narendra Modi are their new RJs, joke executives at private radio stations, a reference to the often-verbose ads featuring the two used by their respective parties, the Aam Aadmi Party (AAP) and the Bharatiya Janata Party (BJP).
The executives are also laughing at their own joke—all the way to the bank. Heavy advertising by political parties has translated into business of aroundRs.50 crore for FM radio stations over the past few months.
The Congress party too has a presence on radio stations, but this isn’t personality-linked.
A senior executive at Fever 104, the radio station run by HT Media Ltd, which publishes Mint, said the BJP is spending more than the Congress on the medium. “We have got ads from all three leading political parties. We saw a similar rush of political ads during the assembly elections as well,” added this person, who asked not to be identified.
Radio executives report a 10% increase in ad revenue for their FM stations thanks to political parties making extensive use of the medium for the first time. A report released by industry lobby Federation of Indian Chambers of Commerce and Industry and audit and consulting firm KPMG last month put the ad revenue of radio stations at Rs.1,460 crore a year.
Vineet Singh Hukmani, chief executive officer (CEO) and managing director of Radio One that operates seven radio stations including three dedicated to English music, said political parties have finally understood the power of the medium and how it can connect with their target audience locally.
Indeed, radio is the only medium that can target affluent car-driving audiences as well as the poor who are not served by print or TV, added Prashant Panday, CEO of Radio Mirchi, owned by Times Group’s Entertainment Network India Ltd. “Radio’s reach is huge—as per Radio Audience Measurement, there are more than 1.4 crore listeners of radio in Delhi and some 1.2 crore in Mumbai. No other medium gives such reach,” he said.
According to Panday, political parties first tested the medium during the Gujarat assembly election of 2012.
Tarun Katial, CEO of Reliance Broadcast Network Ltd that operates 45 radio stations under the brand 92.7 BIG FM, said the company had gained from political campaigns, given its reach across several Lok Sabha constituencies.
Although private radio operators claim that public broadcaster All India Radio has made a killing from political advertising, Jawhar Sircar, CEO of Prasar Bharati, said the network had just earned around Rs.12 crore. “This is not a great figure given our reach,” he said.
The Rs.50 crore number is a big jump from the Rs.8 crore radio stations made in the campaign for the 2009 general election, said Hukmani. “Ban on political advertising on radio was lifted just before the 2009 elections,” he said.
Panday said the sector could have gained more if the phase three auctions were held on time to enable more radio stations to come up. The auctions were expected to be held in 2013.
Source: http://www.livemint.com/Politics/9jZ33EHKDsi35SO2sxkZTL/Radio-firms-revenues-get-an-election-boost.html
Posted by akashvanisamvaad at 07:38