And the Medal goes to……. Sakshi Malik

India’s valiant woman wrestler Sakshi Malik ended India’s long wait for a medal at Rio Olympics by securing the Bronze in the 58 kg category, pulling off a startling 8-5 victory over Aisuluu Tynybekova of Kyrgyzstan in the play-off.

Sakshi is now the FIRST INDIAN WOMAN WRESTLER to win an Olympic medal. 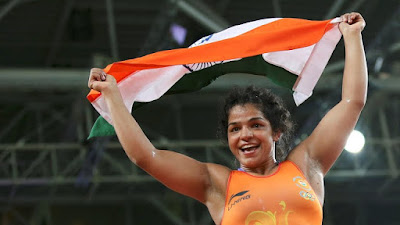 The 23-year-old Rohtak girl became the only fourth woman athlete from India to win an Olympic medal as she earned the dramatic win after falling behind 0-5 in the do-or-die bout on day 12.
With her bronze Olympic medal, and her silver award at the 2014 Commonwealth Games in Glasgow, Malik has now immovably settled herself as one of India's wrestling greats.

“Meri 12 saal ki tapasya rang layi”, said an emotional Sakshi Malik, who took up wrestling at the age of 9, after her sensational win. 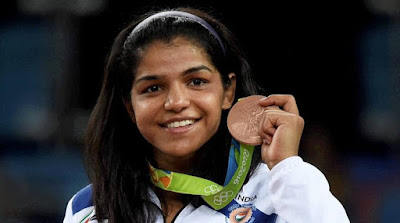 In her past achievements Sakshi has clinched silver medal at the 2014 Glasgow Games and a bronze at the 2015 Asian Wrestling Championships in Doha.  She is now the pride of India.

The country's sporting fraternity, led by iconic cricketer Sachin Tendulkar, hailed female wrestler Sakshi Malik for clinching a historic bronze to end India's frustrating wait for a medal in the Rio Olympic Games. Tendulkar praised Sakshi for her resilience in the women's wrestling 58kg class and said that the country was proud of her feat.

"What great news to wake up to! #SakshiMalik, your resilience at #Rio2016 has made whole of India proud. Many Congratulations!!!" Tendulkar, who is also goodwill ambassador of the Indian contingent at the Rio Games, said.
The country celebrated the girl’s grit with open hands and now she is the Star of the country.
All India Radio wishes this brave woman wrestler many congratulations on behalf of the whole nation!


We are proud of you Sakshi!

Payal Choudhary
Posted by akashvanisamvaad at 15:42