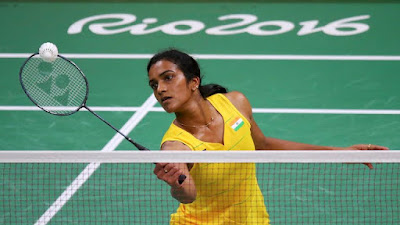 With the paramount win, Sindhu has turned into the second Indian badminton player to enter Olympic semi-finals after Saina Nehwal accomplished the deed four years ago. She won the match in straight sets of 22-20, 21-19; thereby dominating her Chinese opponent with an aggressive play.

The 21-year-old Indian now stands just a win away from assuring India an elusive medal at the Rio Olympics. Having conquered world no. 2 Yihan, India's hopes, now rests on Sindhu who will face the winner of the last quarterfinal that will be between Japan's Akane Yamaguchi and Nozomi Okuhara on August 18 for a place in the gold medal encounter. She will now be playing in the semi-finals against Japan's Nozomi Okuhara on August 18, thursday.
All India Radio wishes this ace shuttler all the best for the semi-finals.
Jeeto Rio.
Posted by akashvanisamvaad at 12:42